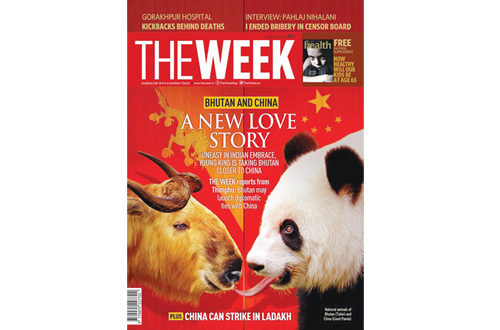 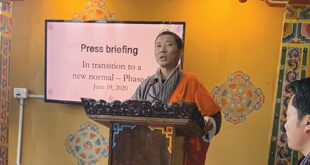 The latest issue of ‘The Week’ magazine, a national magazine in India, led to a stir among many Bhutanese not only due to its front cover portraying Bhutan as a Takin being licked by a Chinese Panda, but also for its stories on Bhutan claiming it to be in the process of establishing diplomatic ties with China.

The method by which the reporter of ‘The Week,’ Rabi Banerjee and his companion entered the secured and walled off minister’s enclave is also being treated as a major security breach that is currently under investigation by the Royal Bhutan Police (RBP).

The Magazine cover proclaims, ‘Bhutan and China – A new love story’ and depicts Bhutan as its national animal Takin, staying submissively while China’s national animal, the giant Panda, representing China is shown domineering above the Takin with reddish eyes, sticking out an unusually long tongue to lick the Takin on its lips.

The almost sexual and disrespectful connotation of the image itself has led to strong reactions by many Bhutanese on the social media.

A more serious matter is the continuation of the headline which says ‘Uneasy in Indian embrace, young King is taking Bhutan closer to China.’ However, none of the two articles and an interview done in the magazine supports this bold assertion of the magazine.

The magazine in its cover alleges that Bhutan may ‘launch diplomatic ties with China’. This allegation comes at an especially sensitive time with the Doklam standoff where the militaries of both India and China are facing each other in the Doklam plateau.

The Bhutanese newspaper found there is no ongoing plan or initiative by Bhutan’s Foreign Ministry to launch diplomatic ties with China, as alleged by the magazine. The magazine cover and articles instead came as a shock to Bhutanese officials who have been keeping a low profile and hoping for a peaceful resolution of the standoff.

Bhutan’s position on the issue has always been constant, which is, that it is important to solve the sensitive and important boundary disputes with China before discussing anything else. A 2014 interview by the current Prime Minister stated that Bhutan had no plans to open a Chinese Embassy in Thimphu.

The Week article freely quotes Bhutan’s National Assembly Speaker Jigme Zangpo in all three articles and uses him as the basis to allude to establishment of diplomatic ties with China.

However, the Speaker, talking to The Bhutanese, said that he was firstly upset to see two Indian reporters coming in and sitting in his house unannounced with no appointment. The Speaker said he questioned the reporters on how they could break both security and protocol norms to barge into his personal residence without any appointment or permission.

The Speaker, however, asked the reporters to have the tea already served to them and refused to have any pictures taken of him. The picture that finally made it to the magazine was the Speaker sitting across Prime Minister Narendra Modi in 2014 during Modi’s first visit to Bhutan. PM Modi was cropped out of the picture giving the impression that the picture was taken during the interview. The magazine article did not mention it to be a file picture.

The Speaker told The Bhutanese that the reporters initially tried asking the Speaker about diplomatic issues but that he replied saying it is handled by the Foreign Ministry and the Foreign Minister who at the time was in the BIMSTEC summit in Kathmandu.

“I spent only around five to seven minutes with them and in that time I made it clear that as the Speaker I can speak only about the Parliament. They asked me a few innocuous questions on the Parliament including one on the Parliament’s stand on the Doklam issue,” said the speaker.

The Speaker said he replied to the reporters saying that the Parliament’s stand on the issue is the same as the government’s stand.

The main article titled ‘Dangerous Liaison’ says, ‘Zangpo, however, revealed that Bhutan was talking to China about launching formal diplomatic relations. “I cannot tell you more,” he said.’

In a third article in the same issue titled, ‘Bhutan faces a tough task of choosing between India and China’ the reporter again quotes the Speaker saying that the government is considering forming ties with China.

The Speaker in response to a question by The Bhutanese said that he had not talked at all about China or about any kind of diplomatic ties between Bhutan and China with the writer. He accused the writer of misquoting and also misinterpreting what he had said, which was only to the effect that the Foreign Ministry was the right agency to answer their queries.

The Speaker said that the sequence of events given by the article in the minister’s enclave is also wrong. The article had said that the writer first met the Information and Communications minister Lyonpo D.N Dhungyel who asked the writer to leave along with the security people checking them and then they reached the residence of the Speaker.

The speaker said in fact the writer first came to see him after which only we went to meet Lyonpo D.N Dhungyel.

The Speaker also clarified that unlike what the writer said he is not next to His Majesty The King in protocol. “He probably added that false assumption to try and add some weight to his article,” said the Speaker.

The Speaker in Bhutan is from the ruling party but his office follows a long tradition of independence from the executive to the extent of even making it tough for the government over some recent tax debates in the Parliament. The speaker does not attend cabinet meetings and is not considered to be a part of the executive or the government in power.

The article has several inaccuracies as it mentions that public display of affection was taboo until recently. While Bhutan is not France it definitely has no ‘taboos’ against displays of public affection.

The majority of the writer’s quotes and some assertions in his article are based on an interview with a private blogger, Wangcha Sangey, who is a landlord in Jungshina, Thimphu running rented apartments and rooms.

The Week writer then makes a claim that the Bhutanese government had requested India to withdraw its forces from Doklam so that China, too, would pull back its troops based on a quote from an anonymous ‘senior official.’ The Bhutanese found no such request had been sent on the issue.

The article alleged that the giant Buddha Dordenma statute worth ‘USD 100 mn’ is being financed by Aerosun Corporation an equipment manufacturer in Nanjing, China. However, the reality is that statue is actually for USD 47 mn and is financed by some Singaporean Buddhist devotees. Aerosun has only been hired to build the statute given that only they have the capacity to build such statutes at such a cost on the wider region.

Another assertion by the article that hydropower financing has been cut from INR 969 crores to INR 160 crores is also completely inaccurate.

However, the problem of the article is not only in its inaccuracies but also in an underlying arrogance when it documents the writer going in uninvited to a high security zone of the minister’s enclave on a holiday, and rudely entering the private residences of ministers without any invitation, appointment or even permission.

The writer in almost a voyeuristic form of journalism documents the surprised reactions of ministers, one of whom was in his casual night dress.

Inserting himself as a protagonist in his own story the writer portrays the refusal of the ministers to entertain him or answer his questions as being something out of the ordinary.

Be it in New Delhi or in Beijing even the most senior journalists of their outlets do not enter the private houses of ministers without permission. It would be treated as a security breach.

Other quotes in the article are from a taxi driver who drove him from the airport, a random tour operator and a monk named ‘Jigme Thinley,’ which coincidentally happens to be the name of the former Prime Minister of Bhutan.

The article also features the Opposition leader saying he will not comment and the Information and Communications and the speaker accusing the writer and his companion for barging into their private residences without any appointment and then asking them to leave.

The Police Chief Colonel Chimi Dorji who is overseeing the security breach investigation told The Bhutanese that the journalist had not shared at the security gate that he was a journalist coming to meet ministers. “He instead told the guards that he is there on ‘official business’ after which they let him in,” said the police chief.

The police chief said that an investigation is underway and all the police officials at the gate from the police officers down to the police personnel will be held accountable.  A police committee would decide on differing levels of action against the security team depending on their responsibility, from suspension to demotion and reprimands among others.

Colonel Chimi said that the security protocol of the entire walled of minister’s enclave will also be revised and made more stringent to prevent future security breaches.

The article by the magazine which was widely shared in the Bhutanese social media generated strong reactions from most readers.

Chimi Seldon on twitter said, “He can’t even get basic facts right, what do we expect? ‘Public display of affection no longer a taboo.’ When was it taboo in the first place ?”

Wangdi Gyaltshen said, “Speaker next in importance to the King? Seems to have got most of his information from a taxi driver and some youth he met- laughable.”

Sonam Tshering on Facebook said, “He should have been charged for misleading the guards and trespassing into the Minister’s enclave and also charged for malicious intent in undermining our foreign relations. He deserves nothing but a permanent ban from entering our country forever.”

Yeshi Wangchuk on Facebook said, “Dear Indian friends, please do not get paranoid with all kinds of fantasies. It’s not about India or China. It’s about Bhutan that we are most concerned with. If your men are doing anything to harm our security and sovereignty, tell them not to do so.”

Puran Gurung a free lance journalist said, “Most of the quotes in the story were never made by the high officials of Bhutan.”

The article came in for reprieve from senior Indian journalists too.

Business Standard columnist Ajai Shukla said, “A most un-nuanced and one sided reading of India Bhutan relations at a time when both countries are behaving with tact and sophistication!”

Former NDTV defence correspondent and now DD show host Nitin A. Gokhale said he did not expect The Week to do this.

Deputy Editor and Diplomatic correspondent with The Wire said, there were many holes in The Week story and she even debunked the Buddha statue facts and source of funding put forward by the magazine pointing to its correct price of USD 47 mn and its financiers in Singapore.

Several other senior Indian journalists re-tweeted criticisms made of the article on twitter.

An Indian news portal OpIndia also debunked many aspects of the article based on criticism directed towards it on the social media.

On a separate note Nikkei Asian Review a Japanese news outlet on 24th August ran a news story with the headline ‘China woos Bhutan with $10 bn in standoff with India.’ The story written with a dateline from New Delhi alleged that China has offered Bhutan $10 bn in economic assistance to soften its stance. The rambling piece quotes an anonymous Indian government official without even mentioning the Ministry or agency.

The Bhutanese has learnt that no such ‘offer’ was made to Bhutan or its Foreign Ministry.