With the local residents now very dubious of any claims of the completion of hospital at Jatshoka in Wangdue Phodrang— credited to the yearly coverage making rounds that the Hospital is all set to be handed over to the Ministry of Health and then to the Dzongkhag for the last four years, it will be difficult to convince them to trust any predicted dates unless the handing-taking happens for real and the hospital fully operational.

“We were to handover the Hospital to the MoH in February this year but the HIDD pointed out some minor flaws for rectifications and that put everything to halt. HIDD also pointed out that the water treatment plants need to be completed for the functionality of the hospital. We agreed to that and of the two water treatment plant, one is complete,” said a project official.

The project official also added that the management wrote to the MoH to take over the infrastructural first and then the water treatment plants after its completion but there has been no correspondence from the latter so far.

An official from the Ministry of Health said that their team, during the inspection found that the infrastructural developments were well met as mandated; however, they raised issues concerning the water treatment plants that were still under construction as the project had some issues with the contractor which led to the latter’s termination.

The official from MoH said that the ministry is waiting for the project to rectify the minor issues that were raised during the team inspection like the mass cleaning and few fixations concerning the heating system, ventilation, sound system, and emergency fire services. And foremostly, the issue regarding the two water treatment plants which was still incomplete was emphasized.

“One of the water treatment plants, as we have noticed supplied water to the residential colony and the project authority also said that it can cater to the hospital but we realized that the water supply to the hospital will not be very reliable and we wanted to assure that there is continuity 24 hours. We made it clear that until and unless the two water treatment plants are fully operational, we cannot take over even if the infrastructure is ready but the services are not,” said the health official.

The project management, however, argued that the MoH should the first take over the completed infrastructure and the water treatment plants after its completion as the minimum defect liability period for a year is running out. “We cannot ask the contractor to rectify if there are complication with the infrastructure after the defect liability period is over and everything will have to be incurred by the Royal Government of Bhutan, so it for this reason that we are requesting the MoH to take over at the earliest and test the systems in place,” said the official from the project.

However, as a follow up to the letter sent by the project management requesting to take over the infrastructure first and then the water treatment plants after its completion, the team is waiting for the final decision by the health minister and the secretary after they have submitted the report on the Hospital along with the suggestions by the project on April 25, 2019.

The project’s superintendent engineer, Pemba Dukpa said that a water treatment plant that is operational will have no issues in ensuring continuous water supply to the hospital. “Moreover, HIDD has raised minor issues concerning mass cleaning and some fixations which are all rectified. There is no issue at all,” said Pemba Dukpa.

Initially, the hospital was supposed to be 40-bedded but it was later turned to a 60-bedded upon the health minister’s command as it was seen viable and accommodating enough.

A trauma center will also be set up, given the strategic location of the hospital along the highway.

The hospital is also expected to cater to patients from nearby dzongkhags such as Gasa, Tsirang, and Punakha. With not a single gynecologist in the dzongkhag, a gynecologist and a surgical specialist will also be arranged in the new hospital.

The hospital and other surrounding infrastructure inclusive of residential colony, parking, road, children’s park, water treatment plants was constructed at a cost of 655 mn.

Share
Previous His Majesty’s Address to the 1st Convocation of KGUMSB
Next Price of hazelnuts can only be renegotiated after the repayment of the company’s loan: Agriculture Minister 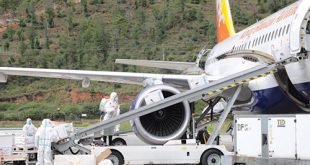 Bhutan completes 21 days without any case from the Community

Government doesn’t have the authority to waive the SDF or MDPR: PM