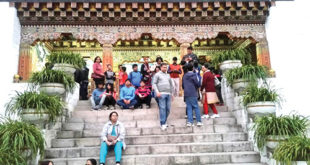 The standard operating procedure for SDF for regional tourists

GST bill has an unsettling start

Bhutan will soon have a reliable database on all the water birds roosting and thriving in Bhutan. This will be made possible through the nationwide annual water bird count initiated by Ugyen Wangchuck Institute of Conservation and Environment (UWICE) in Bumthang in collaboration with the Department of Forests and Park Services of Ministry of Agriculture and Forests.

The project, first of its kind, will engage officials from the relevant organizations and bird enthusiasts to scour all the river systems in the country tallying and recording the diversity of Bhutan’s water birds. The officials will be travelling along the many meandering rivers of the country and will try to document and record all water birds they encounter. They will take pictures to identify the species and to add to the ornithology database.

Such an attempt, according to the officials engaged in the project, will help to generate a comprehensive data and information on Bhutan’s water bird diversity. It will not only help reveal how rich Bhutan is in the avifaunal diversity, but will also make information available for researchers and bird lovers.

For now, except for the plain general bird tally, the information on water bird diversity is critically lacking. The bird record in Bhutan included those documented by parks and other protected area system during their regular biodiversity survey and other sporadic sighting of new species chanced upon by forests officials and other bird fans.

The survey team, during the exercise, will particularly look into the types of habitat a particular species is found in and adapted to. In addition, officials said that it will help estimate populations as to how many each species of water birds are thriving in the whole country. The team will also be assessing the bird responses to the climate change.

“Climate change critically impacts the bird and their adaptability,” said survey head of the UWICE. He added, although initially a species of bird though roost and live in certain ecological habitat, their habitat changes due to increase of temperature and other impacts of climate change. Hence, he said, the bird goes through mutation to adapt to the changing environment.

“They either move out to the suitable habitat or else they evolve to fit in the habitat.” Therefore, the survey team members will look into such components and accordingly come out with the findings. Such findings, according to the source, will be made available for information seekers.

The initial launch of the survey was done two weeks ago, coinciding with and in commemoration of the 34th birth anniversary of His Majesty the King Jigme Khesar Namgyal Wangchuck. Every February 21, when the general public celebrates His Majesty’s birth anniversary in Changlimithang and other parts of the country, the team of forest and UWICE officials along with other bird enthusiasts will be down by the valleys, scouring the river banks to record the water birds.

Some of the water birds already recorded and known to be thriving within the river ecosystem of Bhutan are  cormorants, ducks, egrets, storks, black-necked crane, plovers, sandpipers, wagtails, kingfishers, dippers and herons.

According to official record with the Ornithology database maintained by UWICE, Bhutan’s bird tally currently stands at 689. Some of the most recent new species of birds recorded and entered in the database include  Ardeola Bacchus or Chinese Pond heron which was recorded in June 2014 by the Bumdeling Wildlife Sanctuary, black-headed gull, scientifically termed Larusridibundus first sighted in Royal Manas national Park, Hodgson’s Frogmouth (Batrachostomus hodgsoni) also recorded of their presence in Royal Manas National Park, Barn Owl (Tyto Alba) in Jigme Dorji National Park and a few more.