A Green Revolution in the East under the Eastern Development Initiative

An important part of the Eastern Development Initiative given in-principal approval by the cabinet in August 2014 is the development of the Agriculture, Livestock and also food processing industry in the East.

An interesting facet of the plan is based on the capacities asking gewogs to produce and focus on certain food types for higher production and more efficiency. In Agriculture the main focus areas are major cereals like maize and rice, oil, crops and vegetables. The plan focuses on increasing the production of food in these areas by identifying certain gewogs to produce one type of food crop; the investments to be made by the government will be irrigation, farm roads, cold storage, electric fencing etc and the processing centers in different Dzongkhags (See Box 1). 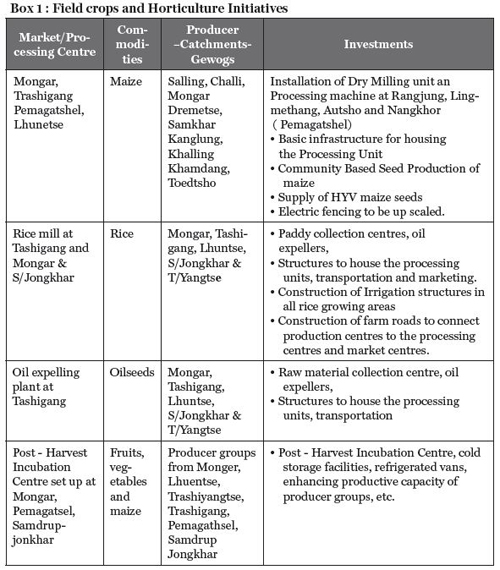 The plan says that maize is the most important traditional crop in the east. High yielding disease resistant maize varieties are being promoted and ir-rigation systems improved. Initiatives include up-scaling product develop-ment, building infrastructure for maize collection and processing centres, and provision of machineries for Kharang and Corn flakes production. Protection from wild animal damage e.g. electric fencing will also be enhanced.

It says that eastern Bhutan has spe-cific rice growing valleys such as Radhi, Phongmey, Tangmachu and Phuntsho¬thang. However, lack of irrigation, farm labour shortage, wild life damage and lack of post harvest initiatives are major constraints.

According to the report the estab-lishment of a large-scale rice mill has already been initiated in Samdrupjong¬khar. Other rice milling industries are planned for Trashigang and Mongar with several collection centres. The gov¬ernment says that since water is crucial for rice cultivation the Government shall invest in supporting Irrigation schemes planned for 11th FYP which is renovating and building 155.5 km of irrigation canals and also some additional 81 km beyond the plan in Mongar, Tsakaling, Drepong, Chali and Samang.

In terms of fruits a minimum of 50 acres per Dzongkhag of fruit orchard shall be developed for demonstration, training and supply of seedlings to promote commercial farming of fruits such as citrus, sugar cane, bananas, pears and hazel nuts in the east. Also, the RNR Research centre Wengkhar which has been in the forefront of promoting fruit production in the east which will continue.

The report says that there is potential to promote oil crops like mustard and sunflower in some pockets for east Bhutan as source of livelihood and income and also replacing imports. It says these crops can be supported along with establishment of oil expeller plants in Trashigang. State of the Art Storage and Cold Chain facilities shall be established in strategic locations of Mongar, Samdrupjongkhar and Nganglam townships.

An important component of the plan is also improving production of of Livestock, dairy and poultry products and establishing various processing centers. The plan has identified gewogs in the eastern Dzongkhags that will specialize in the above products along with processing centers. Various support like central dairy plant, milk collection center, day old chicks, feed, transport van and etc will be given by the government. (See Box 2). 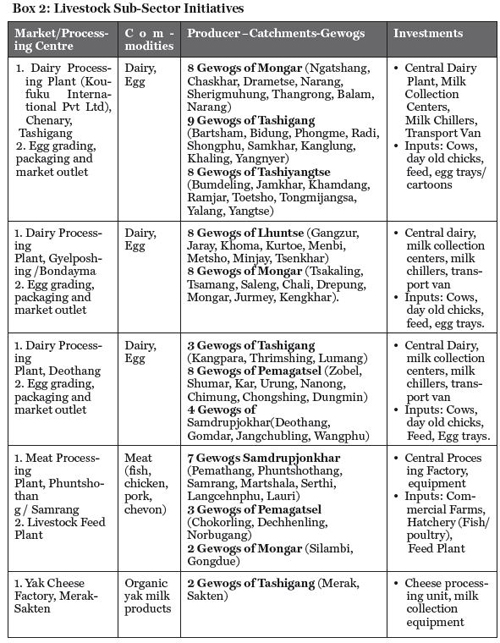 Medium to large-scale dairy and meat processing factories shall be established to serve as assured market for farmers produce and to improve product development and packaging.

There will be a livestock industry hub for meat production in Phuntshothang and Samrang with mega farms for goat, pig, fish and chicken. The initiative will Increase capacity of Lingmithang farms for chick and piglet production and integrate fish production in the feasible hydropower dams. Livestock farms will also be encouraged and easy credit will be given.

It also includes establishment of Forestry based as well as non timber forest products in the eastern region.

The non timber products are Churoo and Rubia (Tso) in Lhuentse, Rubia and lemon grass in Mongar, Chirata, bamboo and cane in Trashigang, Pipla and Rubia in Pemagatshel, Chirata, Daphne and Rubia in Samdrupjongkhar and Chirata in Trashiyangtse.

Since the start of PMTCT services out of 139 HIV positive pregnant mothers, only one Mother to Child Transmission case reported in 2020 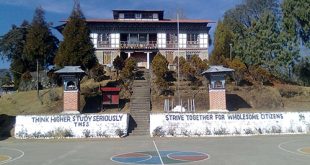 The culprit who tampered with the BCSEA answer sheets of 40 Trashitse students will be dealt with seriously: PM 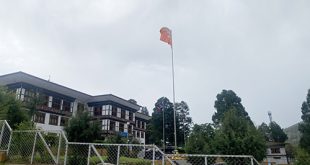 A nascent Tech Industry and what it means for Bhutan

His Majesty’s Addresses, over the few years, have recurringly been on technology and innovation, and …