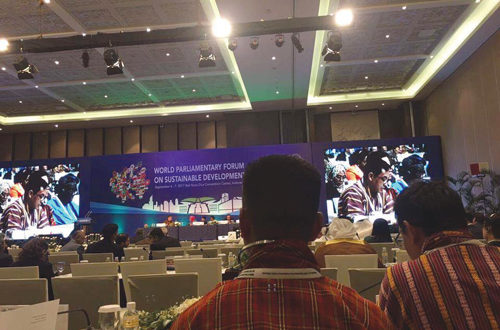 The Bhutanese delegation at Bali, Indonesia

The Bali declaration of 7th September 2017 in the World Parliamentary Forum meeting had 17 points on its stated agenda of Sustainable Development. However, what gathered the attention of the international and regional press was on the sole 10th point naming Myanmar and expressing concern over violence in Rakhine state.

Bhutan was named as one of the 49 countries that joined the declaration which was seen as going against Myanmar. Bhutan has bilateral diplomatic ties with Myanmar since 2012. Only India as the 50th country disassociated itself formally from the declaration.

However, the situation in Bali was far more complex on the ground and Bhutan, given those complicated circumstances, while not officially disassociating itself from the declaration, took a more nuanced stand along with many other countries.

The NC Chairperson in his tour report said the conference was about SDGs and the expected outcome was a non-legal, non-binding declaration.  A draft declaration which was circulated to the delegates at the conference had twelve clauses and none of them made any reference to the ‘violence in Rakhine State’ of Myanmar.

So when Myanmar’s name cropped up much later towards the end, in the declaration, the delegation was in a bind as Bhutan’s foreign policy normally avoids naming and shaming bilateral countries in multilateral forums.

The Thrizin in his report said, “As parliamentarians, we have always been mindful of not including bilateral issues in multi-lateral forums. We are also mindful of our bilateral relations with other countries.”

Referring to Myanmar’s Rakhine issue the Thrizin said, “This was just one among the seventeen other clauses of the declaration. No adequate coverage or weightage has been given on other clauses. The one on ‘violence in Rakhine State’ has been overemphasized.”

Explaining in his report how the meeting supposed to be on SDG first saw the Myanmar issue being introduced, the Thrizin said that delegates were made to stand up and observe a moment of silence during the inaugural ceremony in connection with the ‘violence in Rakhine State.’

“This particular ritual of observing silence was also not reflected in the original agenda of the inaugural ceremony and took many of us by surprise,” said the Thrizin.

During the plenary meetings at the conference, the delegates were given opportunities to ask questions and speak briefly for five minutes in the first plenary meeting and three minutes in another plenary session. The Thrizin said that none of Bhutan’s discussions were on the Rakhine issue and in fact Bhutan’s two interventions on the SDG were highly appreciated.

When the draft of the Bali declaration was circulated, the clause on ‘violence in Rakhine State’ was found inserted as a unilateral proposal by the Chairperson of the Conference, who was a Member of Parliament from the Republic of Indonesia.

The clause in point number 10 said that Parliamentarians “Express deep concern of ongoing violence in the Rakhine state of Myanmar, amongst others, and call on all parties to contribute to the restoration of stability and security, exercise maximum self-restraint from using violent means, respect the human rights of all people in Rakhine state regardless of their faith and ethnicity, as well as facilitate and guarantee safe access for humanitarian assistance.”

As per the  Thrizin’s tour report delegates from many countries expressed strong concern during the plenary session that the issue of ‘violence in Rakhine State’ should not be mixed up with the conference on SDGs.

The Bhutanese delegation also raised hands as well as country-placards to express difference of opinion on the proposed new clause before the adoption of the declaration. Many other countries did as well. However, owing to the time constraint, a few countries including Bhutan could not get an opportunity to express reservation against the inclusion of a non-agenda item resolution.

Given the objections to the draft from many countries saying that the meeting was about SDG and not on Myanmar’s Rakhine issue, a drafting committee was supposed to frame the final draft.

However, given that some countries in the drafting committee,  chiefly Turkey and Bangladesh, wanted to retain the Rakhine issue, the final draft was still unchanged.

The Thrizin was initially approached by the host country to present the declaration for adoption. “We understood this to be a considered gesture owing to the positive manner in which of our humble interventions were received. I politely declined the opportunity for obvious reason,” said the Thrizin.

He clarified in his report that there was no vote on the issue and rather, it was adopted by consensus and the Chairperson of the Conference asked all the delegates to applaud by clapping hands to show support for adoption at the end of the conference.

The Bhutan delegation did not do so. The head of the delegation specifically instructed delegation members to refrain from doing so.

“We were quite confident about sixteen other clauses of the declaration related to the SDGs but did not feel comfortable about mixing the issue of ‘violence in Rakhine State’ with outcomes of an SDG conference. Yet at the same time, we did not want our reservation on that single clause to sideline or overshadow our general support for the sixteen other clauses since those were the main outcomes of the conference,” said the Thrizin in his report.

The Thrizin said that expressing reservation on the clause about ‘violence in Rakhine State’ was neither to endorse nor to reject the issue by the delegation. The conference was simply not the forum for discussion. The basis of the invitation for the delegation was to participate in a parliamentary conference on SDGs.

He pointed out that like many other countries who had expressed concerns earlier, the Bhutanese delegation also chose not to make a formal statement at the moment of adoption as it should not overshadow the general support for sixteen other clauses.

So in the end the Bhutanese delegation did enough to let it be known that it, like many other countries that protested verbally, was not happy with the last minute inclusion of Myanmar in what was supposed to be a SDG forum and declaration. 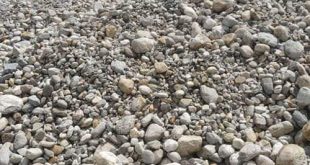