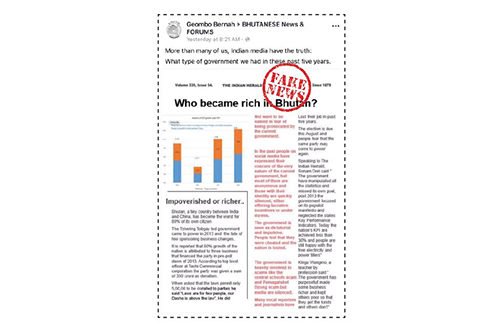 One of the biggest threats to Bhutanese democracy and society has been the growing spread of fake news and hate speech, especially on social media. The Bhutanese has taken the onus to expose some of the fake news and fake accounts here to better educate and inform the public.

The Bhutanese will from time to time expose some blatant fake news that aims to confuse Bhutanese citizens and create disharmony.

We will also give a fake news seal like the one here.

This does not mean that other posts not reflected here by The Bhutanese paper are not fake or that all posts on social media are untrue.

The latest example of the fake news is the post above by a fake account called Geombo Bernah in the BHUTANESE News & Forums well known for being the main source and forum of fake news in Bhutan.

This account has skilfully designed the image of fake Indian newspaper called ‘The Indian Herald’ and written an article titled ‘Who became rich in Bhutan. ‘

The ‘article’ alleges that a bribe of Nu 350 crore or Nu 3.5 billion was given by the Tashi Commercial Corporation to the government.

It alleges a ‘Central school scam’ and a ‘Pemagatshel Dzong scam’ without giving any details or evidence.

It quotes a fake person called ‘Sonam Dorji’ who alleges that statistics are all manipulated.

The Bhutanese found that while there is an online English paper called the Indian Herald it is a completely different one and has not carried any news on this issue. The ‘news’ is also completely fake with no evidence and substance to back them up.

The fake account, Geombo Bernah has taken the trouble to post this same fake news on a smaller forum also known for fake news  and called Anonymous Society of Bhutan.

Geombo Bernah is a fake account but it has posted several posts in support of the DPT including a recent party profile picture of the DPT President Pema Gyamtsho with the party logo saying that he has the highest standards for leadership and asking for votes in his name.