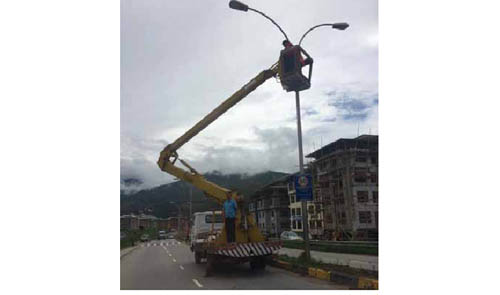 It is not safe to drive along the murky expressway in Thimphu these days. The replacement of the previous lighting system is on the go and expected to be completed by November before the 60th birth anniversary of the Great Fourth.

The public however are concerned about the dark expressway. One of the residents in Babesa who works in the main town said, “We never know when it comes to young people driving, there is always a risk of accident and crime when the highway is dark.”

Repairs started approximately 3 weeks ago and presently the works on repairing short circuits and damages are done. The junction boxes are getting replaced along with the arms. The present arms are heavy and get easily damaged in cases of accidents.

The now dark roads will be illuminated by induction lights along the expressway for which the budget is Nu. 12.3 million. Nu 1 million is for the other miscellaneous works including the maintenance. These new lights are preferred for their technical advantage and energy efficiency. Streetlights in the other parts of Thimphu excluding the expressly is to be replaced with LED lights for which a separate budget of Nu 10 million has been assigned.

The actual replacement of lights has not started yet as the city corporation is waiting for the necessary parts and equipment for the light replacement which will be delivered by September. For now, the jointing work is being done, cables, junctions boxes, arms and poles are being repaired or replaced.

Another reason as for why the lights have been cut out is in order to protect the workers from being electrocuted. Executive Engineer, Mr. Luv Kumar Chettri said that they are aware of the problem regarding the dark streets and are now suggesting the workers to remove and carry out the maintenance work alternatively, so that at least the alternate poles will be lit.

“Until the work is complete we can just suggest the people living in the city to be cautious while driving” he added.

BCCI appeals on behalf of karaoke bar and club owners

After the announcement from the Thimphu Thromde’s Entertainment Licensing Committee (ELC), the Karaoke bars and …