The Ministry of Health (MoH) said that 7,664 cases were registered suspecting dengue fever from 18 Dzongkhags whereby Phuentsholing hospital contributed the highest with 87 percent of them.

The MoH so far has confirmed 1,989 cases using the Rapid Test Kit.

Two additional deaths were reported due to dengue and as of 29 August 2019. In one week’s time, there was an increase by 451 new cases. In total, four lives were lost to dengue this year as of now.

The second highest was reported from Sarpang Dzongkhag with 100 cases followed by 76 cases by Trashiyangtse Dzongkhag. Bumthang and Lhuentse are the two dzongkhags who have not reported a single case of dengue in 2019.

However, an official from MoH said that despite so much challenges they are achieving something good in the current week. He said, “In the current week, Phuentsholing is seeing daily decrease in the number of confirmed cases from 111 to 44 on 28 August. Similarly, Khamdang BHU I is seeing only 2 to 3 cases in the last two weeks from 10 to 15 cases in the past.”

Meanwhile, Lyonpo Dechen Wangmo, Minster of MoH said that this is the first time they are seeing dengue cases everywhere (18 Dzongkhags). But she said people should know that these are not endemic, but are imported as there is a history of travel to places like Phuentsholing.

She said, “Talk to a doctor if you get fever after coming from an endemic area and that way you will get treated on time. From our side we will train our health workers.”

Since the outbreak they have started distributing broachers with messages on dengue to the travelers, especially those who were travelling towards the endemic areas.

Lyonpo said this is sheer responsibility of every individual to be cautious.

Lyonpo also said that they have distributed chemically treated mosquito net but people do not seem to be using it. “When health workers come to visit for place for any awareness program or for an inspection of your surrounding then please cooperate because together we can prevent dengue,” she added.

For them, Lyonpo said that the top most priority is the safety, well being of the patients and then control of the outbreak. 7,664 cases are suspected cases which are precautionary measure whereby patients are being admitted to study them, she said.

To prevent or bring down a dengue in future, they will develop dengue operational plan for source reduction, initiate capacity building for dengue management, develop early warning system and case investigation, strengthen vector surveillance and reporting system and finally they will strengthen collaboration and coordination with stakeholders for prevention and control of dengue outbreaks.

Officials said the most probable cause for the outbreak is due to heavy rainfall and flood. The other additional causes are poor sanitation across the border town and water shortages. 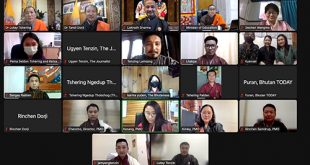 Future of ex-drayang employees and gaydrungs to depend on their own hands: PM

South Thimphu residents without running water in taps for days

Residents in South Thimphu have been experiencing severe water shortages since five days. According to …