From Gewogs and Dzongkhags

All planned activities for the 10th five year plan have been completed before the June closing. The gewog now awaits budget for development activities for 2012-2013.

Jamkhar gewog Gup, Cheku said government might give the budget in July since the budget for 2012 would end in December tentatively.

Around Nu 0.9mn is allocated for the farm road construction.

The 2mn gewog budget would be split between construction of public toilet in the gewog, maintenance of the BHU staff quarter and construction of irrigation channels in Tonga.

Missed the boat but works are still on

The gewog has missed its deadline for completion of development activities for the 10th Five Year Plan.

About 11 schemes of Rural Water Supply Scheme (RWSS) are almost completed and an 11 km farm road budgeted for about Nu 8mn between Narphoong and Remoong is mid-way.

Lhakhang renovation works are also on-going and two statues for the Lhakhang were purchased with the budget of Nu 0.2mn.

With the CDG budget of 0.2mn, five labs/library in Wooling Community Primary School are almost completed. Also a farm road of 1.7 km from Besa Zam to Rading Zam is on-going with the budget of 0.4mn.

It is said activities were delayed due to some inconveniences and now everything is in place and the gewog looks forward for completion of works at the earliest.

The gewog officials from Lunye and Wangchang along with some of the gewog residents were briefed on proper procedures to approach His Majesty for land Kidu.

The Zimpon Wogma from His Majesty’s office visited the Wangchang geog on 4 July.  This measure has specially been taken following numerous accounts of people who approached His Majesty without proper procedures and protocols.

The Zimpon Wogma said if any villagers wish to appeal for kidu, the individual has to approach the local government first and that is the Gup.

Construction of farm road in Khebisa has lead to destruction of the irrigation channels, farmers now face major setback in plantations.

Eight kms of farm road is already completed but it has cut-off the irrigation pipes which have affected the farmers.

Farmers have complained to the gewog’s Gup, who said, there was nothing else he could do since he had already informed the dzongkhag agriculture for budget assistance to buy new pipes.

Gup Ugyen Dorji said the dzongkhag had denied the request on account of lack of funds.

“The Dzongkhag told me to adjust the fund from the gewog but we do not have any budget,” said Gup Ugyen Dorji.

Left choice-less, the gewog has decided to use the old pipes which are extremely worn-out. Farmers are worried whether they will be able to do plantation on time.

Rained down parade for expecting-farmers

Potato producers in Khaling under Trashigang dzongkhag have lost their potato yield to the excessively wet weather. Continuous rain for more than a month has decomposed half of their yield in the field.

The rain not showing any signs to subside or stop, the farmers started to harvest their crop and had to get the potatoes out of the soaked soil, into storage facilities before it rot further.

Productivity for the farmers has hit rock-bottom and at the same time they are worried if those they have collected will be worth selling. Farmers who expected a bumper harvest this year are now left disappointed.

Some farmers who planted few acres of potato seedlings are disappointed since they are not able to reap half of what they planted.

Many are concerned they may not earn like previous years and the initiatives of the government to enhance local agriculture production to meet the domestic demand for self reliance would be affected.

Presently they are in a rush to harvest  in order to reap what little is left.

Decline in the number of clients showing up for family planning 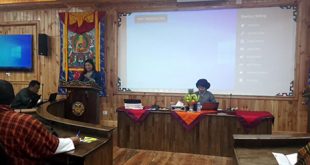 Tech and ICT as the future of job creation in Bhutan