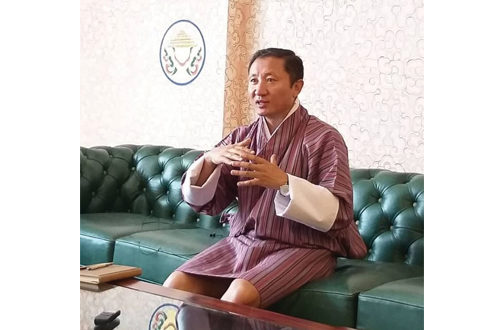 The Opposition Party in a press conference on 5th July had claimed that the government’s decision to remove Zhemgang from the tourism flagship program is nothing but ‘political discrimination’ and an attempt to ‘muzzle’ the opposition.

However, pat came the reply on the next day where the government represented by its spokesperson and Foreign Minister, Lyonpo Tandi Dorji refuted the allegation and said that the only reason for removing Zhemgang and including Sarpang for the program was that Sarpang has a huge potential to develop and become the southern gateway for the country.

Mincing no words, the Foreign Minister accused the Opposition party of playing ‘regional politics -like in the past’ over Zhemgang and attempting to divide the people.

He said, “We are seeing that the opposition party is politicizing every issue and especially more so in terms of dividing the people. I would like to request the opposition to change their mindset and come to where we are now to unite the people.”

“Let’s not divide the people on political grounds because they have done it before on regional grounds and they are doing it more with the people of Zhemgang. This is of serious concern because instead of taking democracy forward they are keeping it to where they have started,” alleged the minister.

Lyonpo said, “The Opposition has played a very strong divisive role to fuel the sentiments of the people. They have said that the government has set a bad precedence but the worst precedence has been set by this particular party and the people of Bhutan has not given them a chance to come back as the government.”

“The sense of fighting between two parties has been set by this party and the divisive role played by this party is very unfortunate,” he added.

Lyonpo Tandi said during the press conference that though the government should have allotted only three districts for flagship programs based on the west, central and east regions, it had gone for Dagana, Gasa, Lhuentse and Zhemgang. Lyonpo said that during the parliament session while deliberating on the opening of entry points from border towns for tourists, the opposition repetitively insisted on opening of all border towns despite the government opposing it.

“The government stated we do not have infrastructure and system in place besides security issues but the opposition kept on insisting.”

Upon their insistence, Lyonpo said that the government carried out a study on the feasibility of opening entry points and discovered that Sarpang has the greatest opportunity and can be the gateway for Bhutan in terms of tourism like Phuentsholing.

Lyonpo said, “If we can open Gelephu it has a lot of advantages like development of Gelephu Airport and Immigration and Custom Office and it will also benefit other regions like Tsirang, Zhemgang and Trongsa.”

He said, “According to the Bhutan Tourism Monitor, Sarpang received one of the lowest tourism arrivals in the country with only 231 tourists while Zhemgang received slightly higher at 332 tourists. Zhemgang has a target to achieve 1,250 tourists bed nights but they already have 931 bed nights and so a flagship program is not needed.”

Lyonpo said there is availability of huge land and space in Sarpang for further development whereas there are many projects in Zhemgang like Eco-tourism and Rafting, Trong Heritage Village and Annual Bird festival which the government will still support.

Lyonpo said that the government is well aware that Zhemgang needs special attention and because of this they have allotted Nu 1.009 bn in capital budget in the 12th plan for Zhemgang whereas Sarpang is getting 951 million.

The government assured that it is concerned about the people of Zhemgang and will ensure that Zhemgang is not left behind.

Lyonpo mentioned that apart from these reasons, the government does not have any political interest in removing Zhemgang from the flagship program and giving it to Sarpang. The minister said that if MPs from Zhemgang are not happy with the decision of the government did not approach the government but they instead preferred to write on social media.

“If nothing is happening to Zhemgang despite MPs being in power for three terms, then it is time people should change their MPs,” said Lyonpo giving an obvious hint tp Panbang MP Dorji Wangdi who is the only three-time MP from Zhemgang.

Share
Previous Expectant mothers increasingly opting for epidural anesthesia in JDWNRH
Next Will not be possible to bring Sonam back: MoLHR minister to Dhan Maya

A comprehensive system in place for mental health issues in the country: Health Minister