Increasing quarantine duration decision to be based on evidence: PM 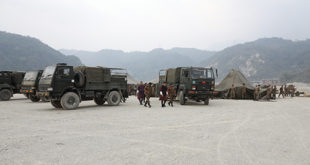 His Majesty The King is in Phuentsholing

The Bhutanese has in its possession a copy of the High Level Committee report of 2003 which shows 45 cases of excess land being found registered within Thimphu from Chunzom to Pangrizampa.

The High Level committee was instituted by the government in 2001 to study cases of excess land registration in Thimphu. The committee had submitted its report by 2003. This first part in the series will look at the unsolved land cases as of 2003.

The case found that 186.45 acres had to be returned by 48 mainly influential individuals.

By 2007, except for around ten cases all the others were completed, as reflected in the status report on the implementation of the high level investigation committee report.

The unsolved cases in 2007 include Gyeltshen with excess land of 2.65 acres, Kinley Wangchhuk of River View hotel with 10 acres, Chang Ugyen with 7 acres and another 3.02 acres, Dasho Tobgye S. Dorji with 49.06 acres,  Umtey Penjor and Phub Tshering with 20 acres, Duptho Wangchhuk with 7 acres, Namgye Chezom with 2.67 acres, daughter of Lyonpo Dawa Tshering, Chimi Tshering with 3.21 acres, Pekimo with 6 decimals,  Phub Dorji with 11 decimals and Dasho Nidup Dorji with 3.59 acres.

The case of Chang Ugyen, who grabbed 10 acres of government land, has the longest description in the report and mentions the tampering of land records. The report mentions that this is a case of fraud and deception.

A case where higher acreage of land was registered was Dasho Tobgye S Dorji. He owned 1.66 acres of apple orchard at Drumthang, Ramtogtog at Babesa. The land had been increased to 50.62 acres with approval from Lyonpo Tamji Jagar in 1981. Since there was no Royal Kasho, Lyonpo Tamji Jagar was held accountable in the report for approving the revision of Dasho Tobgye S. Dorji’s land. The 1980 Kasho of His Majesty the Fourth King had made it clear that only His Majesty can allot land.

Kinley Wangchhuk of Riverview Hotel was found to have illegally converted 15.10 acres of Tseri to an apple orchard and then added 10 acres in his wife’s name. The 25 acres was then registered in the name of his children. The 15 acres was converted back to Tseri and he was asked to pay for the excess land of 10 acres. Land Records Director Lhakpa Duba was held answerable for the lapses.

A high acreage of excess land belongs to Umtey Penjor and Phub Tshering. The then Finance Minister Chogyel allotted 30 acres to the two in 1974 at Limbukha. However, during the time of registration the acreage was increased to 50 acres. The excess land of 20 acres was not allowed.

Another irregular allotment of excess land involved Duptho Wangchhuk. He had bought seven acres of apple orchard above Hongtsho Kuenrey in 1984. He applied for land replacement as the land was densely forested and was allotted a land at Gangchey. However this allotment of 7 acres was not allowed as per the law as the apple orchard had not been cultivated for 17 years.

In the case of Gyeltshen, a royal Kasho had allotted him 2.14 acres in Thimphu and 1.45 acres in Punakha. However during registration the Thimphu land was increased and registered as 4.15 acres while the acreage in Punakha was reduced to 0.95 acres. So the excess registration of 2.65 acres was deleted.

In the case of Chimi Tshering she got 3.21 acres of land replacement in Pamtsho in lieu of her 3.21 acres in Changzamtok which was cancelled.

Dasho Nidup Dorji had registered 4.50 acres of land as sokshing originally. Sokshing land is essentially considered as government land and can be used by a person registering it for only collecting organic material like leaves etc. However this land was converted to Pangzhing. When this land was acquired by Bhutan Telecom he was given 3.59 acres of land as compensation in Thimphu. The committee cancelled this land as the sokshing was never his to give.

Namgay Chezom had taken land compensation for 2.67 acres for Tseri land, for which she was not eligible as it was supposed to be cash compensation. Tseri land is again essentially owned by the government.  Her compensated plot in Chang Gewog near Ngabi Rongchu was cancelled.

The common names that surface time and again in the report are the then Director of Land Records, Lhakpa Duba and land officer Sonam Norbu who were held liable for multiple lapses.

Sonam Norbu and his wife Namgye Chezom had two cases in addition to the above case.

He added 10 decimals of excess land with the approval of Kidu Lyonpo which was not allowed. This case was solved after he was suspended from service and charge-sheeted for the lapses. The recommendation also stated that a special investigation must be conducted on his assets and land transactions he processed.

He was also found liable for the case where his wife, Namgye Chezom had registered 40 decimals of Kamzhing or dry land at Rilo, Zilukha which fell within Thimphu Municipality boundary’s green zone. However, land replacement which should not have been given was allotted from Lanjophakha. Interestingly of the 40 decimals around 10 decimals were transferred to the wife of the then Thimphu Dzongda Dasho Karma Dorji.

The then Thimphu Dzongda and the Chairman of Land Acquisition committee, Karma Dorji was also held liable for administrative action for non-enforcement of lawful and proper directives; abuse of official authority and position with regard to his wife, Sonam Zangmo’s case of acquiring 50 decimals of replacement land.

He was relieved from his services.

In another instance, Lyonpo Tamji Jagar was held liable for lapses  in allotting an acre of land to Late Thinley Dorji at Dechencholing Goenpa. The land was registered in Thinley Dorji’s name in 1984.

Another case involving a land official was when 15 individuals including then Joint Director of Land Registration Division, Ugen Takchu had their excess land regularized.

Ugen Takchu and Surveyor General Sither Namgey had submitted a note sheet to the Home Minister for the approval of regularization. While the note sheet clearly stated that such is not allowed, the report states that the two processed the land for approval. They were held answerable to the lapses.

Attempts by The Bhutanese to get updates from the National Land Commission and the Thimphu City Corporation on the latest status of the above cases were unsuccessful.

Previous Now, it’s the other way round
Next Govt. clueless about National Council RTI bill while its own seems unlikely to come through