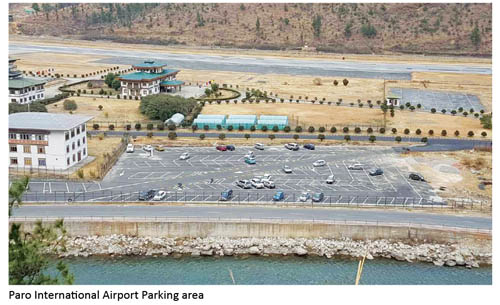 Hue and cry over parking fee charges at Paro airport

The recently implemented parking fee collection system at the Paro airport has sparked much debate regarding the charges levied on the drivers. Many took to social media to outpour their grievances and disagreement of such charges with many terming the existing rates as ridiculous, open daylight robbery and a very disappointing move. People expressed that the Department of Air Transport Authority should look into the matter and find measures to reduce the parking fee charges.

Karma Wangchuk, the Director of Department of Air Transport (DAT) said that despite several announcements through media, there seems to be many who are not aware of the parking rules and are misguided by the false information circulating in the social media. He pointed out that the important issue that the public must understand is that there are four different zones being designated with different parking charges.

The charge for zone one area, which is nearest to the arrival terminal, is Nu 100 for thirty minutes or less. “The parking fees for zone one is expensive than the other zones because it is nearest to the arrival terminal where the parking space is not very spacious. We wanted to decongest the busiest area by limiting the number of vehicles so that people can park their cars in zone one area only during emergencies where the fees are quite high,” said Karma Wangchuk.

Zone four which is about 250 meters away from the arrival terminal and 120 meters away from the departure terminal is the free zone where no charges will be levied for parking the vehicles. “Our airport is not as large as the other international airport around the world. If the public feel that they cannot pay the parking fees, they can park their cars for free in the fourth zone and push their trolleys as the distance in not very far,” said Karma Wangchuk. He also added that they have installed proper trolley stands in all the four zones for the convenience of the public. The parking fees are levied only during operational hours which is at the time of takeoff and landing of the flights and the authority clarified that public are allowed to park anywhere at the other time of the day.

According to Karma Wangchuk, the collection of parking fees is not to make profits and that it was mainly initiated based on the feedbacks received from some of the passengers and officials from the airlines regarding the traffic congestions, especially at the arrival and departure areas. “We have been facing serious traffic congestions in the past, with cars being parked for a very long duration in areas where people actually need more space to check out with their trolleys. So our main motive of introducing the parking fee collection services is to streamline the process of swiftly decongesting the traffic and rendering convenience to the people,” said Karma Wangchuk. The amount collected from the parking fees are directly added to the government revenue.

Regarding the public’s plea to review, scrutinize and reduce the existing parking fees, Karma Wangchuk said that DAT do not have the authority of altering or for that matter, reducing the currents fees. He also said that DAT is not in favor of curtailing the current rates either. “It is not that the authorities did not leave the public without any other alternative on the matter; rather we gave them the choice of selecting the parking spaces through designation of different zone areas,” added Karma Wangchuk.

“The parking fees that we levy to the public are set by DAT and its stakeholders and not by us. People on social media and around think that USD has set high parking fees to maximize our profit, which is not true,” said Ugyen. He pointed out that USD has to pay Nu.418,900 every month to DAT and said he is currently operating at a loss.

“I have to earn more than Nu. 14,000 a day to be able to pay the fixed amount to DAT at the end of the month but our earnings have been much lesser than we have anticipated. I also have twelve staff members in the parking fee collection business and have to pay Nu.8000 as their monthly salary,” said USD.

Ugyen said that if his business continues incurring losses even after several months, he will have no choice as a businessman than to withdraw the contract; even if that would mean the fifteen lakhs he’s deposited as a security amount is forfeited. He said he is going to put up a letter to the concerned agencies requesting to review the monthly amount he has to pay to DAT, so that there can be reduction the parking fees too.

“People think running a parking fee collection business is very lucrative. But the reality is something else with lots of difficulties involved. When we ask for parking fees, some people use filthy language and curse us. There were also instances where some drivers ran away without paying the parking charges,” said Ugyen.

“People have also started accusing USD enterprise of colluding with DAT to acquire the contract in our favor which is absolutely false. We were the highest bidder and we got it,”

Although not more than two weeks after implementation of such parking rules, visible positive changes were noticed in easing traffic congestion and smooth exit of the passengers.

The Minister for Information and Communication Lyonpo D N Dhungyel said that he is aware of the issue and he is closely following up with DAT. “Director Karma Wangchuk admitted that since they are in the initial implementation stage, one or two teething troubles must have occurred. But I am very sure it must have been rectified by now,” the minister said.

The Minister also pointed out that in a way it is good that such issues have surfaced on the social media as the government is made aware of the loopholes existing in the system and is given a chance to clarify on the matters through the media. The recent image of a parking fee coupon circulating on the social media showed that a person paid Nu. 100 as a parking fee for two seconds. To this, Lyonpo D N Dhungyel said that since many people were not aware of the different zones, the person must have parked in zone one area where the charges are quite high.

The public expressed that they are not are against the implementation of parking fee collection system at the airport, but that the charges are unreasonably high. “I think the charges are high right now, and needs reviewing from the authorities. We have to wait for the guest for more than 2 hours and when we park our cars in zone 3 and 4, it becomes difficult for us to push the trolleys all the way back to the car when most of our guest are already so tired from the long journey,” said Phub Dorji, a freelance driver for tour operators.

Another frequent traveler, Sangay said that earlier she was not aware of the designated zones but now that matter has been clarified, she said she didn’t mind the distance from zone 3 and 4.

Karma Wangchuk said that they are working on expanding the parking space at the arrival point, which in the future might bring down the prices. Automated machines will be installed to detect the correct amounts the drivers have to pay which will ease the confusion as well as complaints from the public regarding the irregular collection of parking fees. 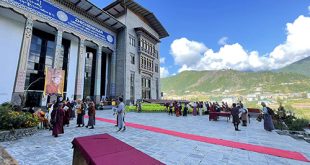 Vajrayana Conference to bring Buddhist practitioners from all over the world