Maiden for the bull’s eye

Strict protocol followed for those coming in from the plane to the hotel: Health Minister

More than 11,000 graduate from De-suung program

Karma, 29, has become the first ever athlete from Bhutan to qualify for an Olympic quota place in any sport. She won a recurve women archery spot for Tokyo 2020 during the Asian Continental Qualification Tournament (CQT) in Bangkok.

Karma stood at 31st rank in the CQT before pre-qualifying for a draft round where she ranked 55 among 71 participants from over 200 countries.

Previously, she had been to Rio, Brazil in 2016, where she represented the country as a wild-card entry. In her first trial at Rio, she had lost narrowly to a world rank 5 archer from Russia. In the same year she bagged 3 bronze medals in the South Asian Games.

In an interview with The Bhutanese, she stated about how she got into the sport and about the life she leads on the pitch. When asked, what made her interested in archery, she responded. “It began as a try,” and that was all it took for her passion to make marks on bigger grounds. She also mentioned that she had been a very athletic person since her school days, and would normally participate in all sorts of sports. 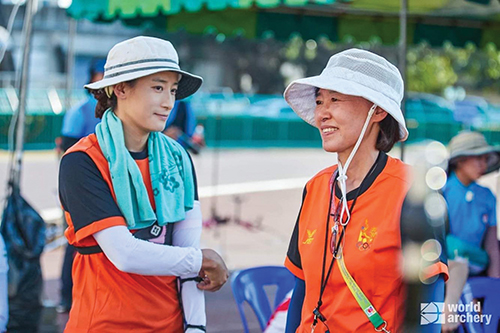 She was inspired to do bigger things for the first time when she met Tshering Choden, her former coach, who imprinted bigger tournament pictures- where she is now. She said that archery has been there for her in lots of ways in life. Like, when she gets stressed, feels despair or simply in her normal mood, she stated that it gives her a peace of mind and a point of focus.

When asked how she felt about being a woman competing in such a sport, she responded, “Traditionally archery had mostly been a man’s sport as girls are usually on the cheering side. Another thing that could be is that girls usually shy away when it comes to sports as such, and think that they can’t do as well as the men. For me, it’s a personal preference, and I think it isn’t necessarily a gender case for the lack of participation.”

Her training schedule is currently monitored by her Korean coach, Miss Park Youngsook, who is a former Olympian. Her friends and colleagues added, “She is hardworking in ways that most of the time, she is practicing in the ground even after her normal practice hours, she has a naturally strong mentality towards things”.

She thanked her coach’s guidance on that comment saying that, her support keeps her will in a positive light and keeps her going well.

“I just go there to have fun, then obtain some medals for the country if I can, and on a personal level, I try to beat my previous records,” she shared her spirit for such competitions.

Karma said she is thankful to the BOC president, her coaches and the Bhutan Archery Federation for believing in her abilities and for always wishing her well.