The Ministry of Labour and Human Resources (MoLHR) has been initiating the Critical Skills Training for all the eligible jobseekers, which is inclusive of the People with Disabilities (PWDs). The first batch of PWDs were initiated last year for five months with a successful rate of 63 percent.

The ministry has trained 45 PWDs under three different programs, of which more than 60 percent of PWD jobseekers are employed. The training comes as a part of the Asian Development Bank (ADB) step-up project, which has also funded to train 1,000 jobseekers of which 5 percent should be PWDs. The project duration is until mid of 2024.

It was learnt that though the ministry has various courses under the project, the PWDs are not able to avail themselves of all the courses, given the various reasons. The program was first of its kind for the PWDs.

The main motive of the program is to help PWDs make their own living, which has made a huge difference in their lives because they are now earning, setting a good example for the rest of the PWDs to follow.

Program Officer, MoLHR, Rattu, said that since this is just a beginning. The ministry decided to take lesser number of participants so as to make it more effective. The number turnout in the first batch was good, and PWDs were positive about the courses.

He said, “It was nice seeing them so excited and happy. We can facilitate with the employment but cannot support them in setting up businesses. However, the candidates are provided with wage subsidy of Nu 5,000 per month for one year. Thereafter, we are hopeful that they can earn more with experience.”

He said there were some hiccups during the start of the program, wherein the most challenging factor was to customize the environment in the training institutes, which as not PWD friendly.

Now with the lessons they have learnt, he said that it is good to see some institutes planning to construct a PWD friendly environment to cater the same services to the PWDs. During the first batch, the ministry conducted the training programs in hotels with a lift facility so that PWDs using a wheelchair are not left behind.

He said, “Giving them the post support is another challenge. PWDs can work, but the employers are reluctant, which is understandable. Nevertheless, things are changing. Some of the institutes have hired them and the training institutes are positive towards supporting the PWDs.”

In the first of its kind, a training on disability equity was given to the training institutes to help better guide the PWDs during the training.

Meanwhile, for the fiscal year 2022-2023, there is a plan to train another 45 PWDs in an environment that is PWD friendly as possible, and the training is to be enhanced by the lessons learnt from the first batch.

MoLHR has asked Disabled People’s Organization of Bhutan (DPOB) to submit a proposal on the training courses for the coming financial year, with focus on tailoring and ICT.

He said, “ICT is something they can do, and they can be a freelance employee. All they need is training and support, in terms of payment gateway which we would support. That is something we are exploring, and we are hopeful to have a right candidate.”

Life is difficult for PWDs because they are dependent on others throughout their lives, which makes them feel morally down. Thereby, the program came on a right time because the PWDs can at least earn, he added.

Number is not important but the quality of ties is: Foreign Minister 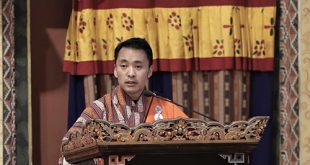 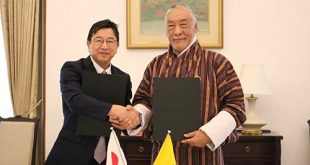 Ambassador of Bhutan to Japan V. Namgyel and Chargé d’Affaires, a.i. of the Embassy of …