There are 8,007 registered voters in Thimphu; 3,694 male voters and 4,313 female voters that will cast their votes in the upcoming Third Thromde Election.

In 2011, the first city mayor election was held, with three candidates from Jungshina, Norzin, and Babesa vying for the position. The incumbent Thrompon Kinlay Dorjee from the Babesa constituency won the race.

However, only the incumbent Thrompon ran for mayor in the second election, which took place in 2016. With a Yes or No vote, eligible electors chose the incumbent mayor from the Babesa constituency for a second term.

Despite the fact that the voters are more concentrated in the north, the south and particularly Babesa has dominated the mayor election since its inception. Despite having a smaller number of voters than the North, the city’s mayor has been elected from this influential south Thimphu region.

This time of the three candidates in the race two candidates are from the north with Ugyen Dorji from Jungshina-Kawajangsa and Sonam Dorji from Dechencholing-Taba and third is the incumbent Kinlay Dorjee from the south.

The incumbent Thimphu Thrompon has a unique distinction of enjoying two continuous terms while the country is on its third new government but such a long time at the head also leads to significant anti-incumbency.

According to Dema, 41, residing in Dechencholing, the north area has a large number of residents but the mayor is chosen from the south every time.

“I believe that now is the time for people to make a change, and to offer a chance to a north or central candidate to run for mayor. As far as we can tell, there is a lot of growth in the south, but there isn’t much development in the north. This time, I believe voters should reconsider their choices and vote for the best candidate. Since the central part is the core city, it is expected that development will take place there anyhow,” she said.

Another resident Sonam, 27, said that Thimphu Thromde’s two terms have come to an end, and the city still has a lot of issues.

“This time, we anticipate a fresh start, and new hope from a newly elected mayor. Someone who genuinely cares about the city and its residents is needed. Why should we just give one person chance all the time,” he said.

Kencho a resident in Babesa says that despite flaws such as frequent diggings and potholes, he feels overall, the city has been transformed with a slew of new projects.

Kinley Penjor, 27, also a resident in Babesa says, “We need somebody who can look at improving basic services first, such as efficient public transportation because current bus timing is so unreliable and worse after you’ve waited for so long, and the bus carries more people despite its capacity, and there’s also inevitable traffic congestion, basic water facilities, and a lot of people complain when there’s no water, so these issues need to be addressed.”

Sonam Dema, 31, said that it is past time for a change, otherwise, residents will be dealing with the same problems that have plagued many people for decades.

“Rather than implementing the same plans established by the same people for many years, we want new administration and new ways of doing and addressing problems. We want reform, and voters should reconsider, think about it, and make a decision,” she said.

The Third Thromde Election will be held on 28 April. The televised public debates for the three thromde candidates starts on 12 April.

The quarantine protocol will be stricter than before: PM 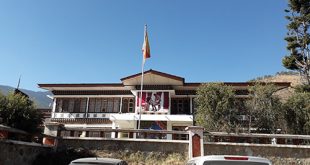 1,800 class X-pass students to enroll in private schools of their choice