The much-awaited Multi-Level Car Parks (MLCPs) set to accommodate at least 570 cars will be complete by the end of June and July. MLCPs will provide a safe place to park cars and help ease the traffic congestion in core Thimphu city.

Construction works on the MLCPs were delayed as it missed two deadlines set in 2017 and 2018. Thimphu Thrompon, Kinlay Dorjee, said due to some changes in the designs, the scope of work was almost doubled and also because of some issues related to the construction, the two MLCPs could not be completed on the given dates.

“The private concessionaire would be responsible for the design, development, finance, operation and maintenance of the two MLCP facilities,” said the Thrompon.

The Chief Executive Officer (CEO) of KCR (KNG Pvt.Ltd, CE Construction Pvt. Ltd. based in Nepal and Rinson Construction Pvt.Ltd.) – a joint venture FDI company, Kinzang Norbu, said the construction works on the MLCPs will be completed this year.

He said the MLCP-1, with commercial space for shops and the parking space, is set to be complete by end of June. MLCP-2 is set for completion by mid of July.

Kinzang Norbu said they are working on landscaping and the final touch up of the building. Installation of the lifts and CCTV in MLCP-1 near Thromde Office, Norzin Lam are being carried out.

For MLCP-2, the CEO said that they are trying to open up the parking for vehicles by mid-July. He said the commercial space would take a little longer to finish, probably by the end of August.

The CEO said the two MLCPs were delayed as they had underestimated the duration needed for the completion. He said the workload doubled after the changes in the design of the MLCPs.

The construction sites being at the heart of the town also did not make things easier for them.  “When we started the work, as it was underground so we had to remove and relocate all the sewage tunnels, cables and water supply.

It was really difficult as we had to contact the relevant agencies to relocate them,” said the CEO. Works were hindered on MLCP-1 located near Zangtopelri due to a high voltage cable belonging to Bhutan Power Corporation (BPC).

“We are also having financial problem, as the construction is borne by the public- private partnership (PPP) mode, that is why we could not keep with the cost,” said CEO Kinzang Norbu.

The construction of two MLCPs was started in 2015. Due to delay in the completion of the construction, KCR was imposed penalty of Nu 2 million. However, CEO said they have appealed to the Ministry of Finance to waive off the penalty.

According to a report from Thimphu Thromde, in 2014 Thimphu Thromde awarded the integrated parking development and management contract for core Thimphu city on Public-Private Partnership (PPP) basis to M/s KCR Pvt.Ltd with 22 years contract period with effect from 1 September 2014.

KCR Pvt. Ltd. was selected on basis of the higher “per parking space annual concession fee” offered to the Thromde.

The winning consortium offered a concession fee of approximately 70 percent higher than what the Thromde was receiving from the previous operator.

After the construction of MLCPs, the concessionaire will pay to Thromde about 60 percent of the total (978 +570 slots) per year with 3 percent increment annually until it reaches to 100 percent.

The contract period will end on 30 August 2036. Thromde is receiving around Nu 9-11 million per year from parking fee collection, three years quarterly concession fee payments already made to Thromde as of date.

Refurbishing, operating and maintaining about 1,000 existing off-street and on–street public parking inventory in the city center. MLCPs may also include commercial areas, developed as per the stipulations of the concession agreement.

The concessionaire will be permitted to do limited commercial real estate development (20 percent of the total built-up area) to increase the viability of the project.

Penden Dorji, a private employee, said the two MLCPs will definitely ease the traffic congestion and parking shortage in the city, especially along the Norzin Lam and Chang Lam in Thimphu.

He said the MLCPs will be prime commercial areas and he is glad that Thromde came up with such a plan. He said he is looking forward to a safe and professional parking facilities in the city.

“Phuentsholing MLCP did not do well in the beginning, and being something new in the city, people claimed it to be expensive, but with time, as usual things settled. So in the same way, I believe Thimphu MLCPs will also have few drawbacks but I am sure it will do better,” said Penden Dorji.

Similary, some motorists speaking to The Bhutanese said it will come as a relief to not have to hunt for a parking space along Norzin Lam and Chang Lam once the MLCPs are operational. 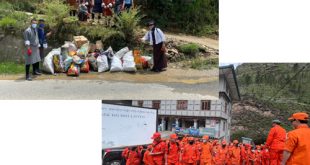 The heavy monsoon downpours are upon us again. And like every other year, the old …