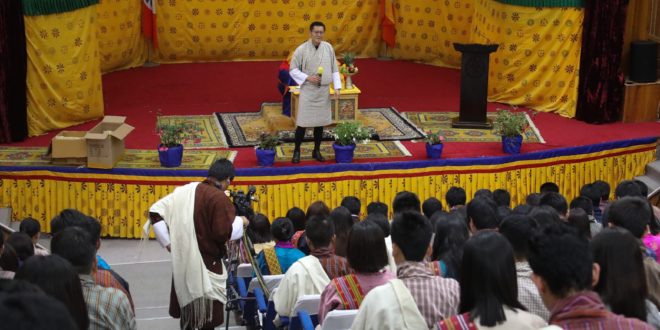 Use Technology to Solve Problems: His Majesty’s Address to RIM Graduates 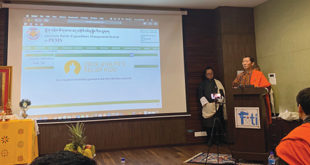 Druk Gyalpo’s Relief Kidu may be extended beyond three months 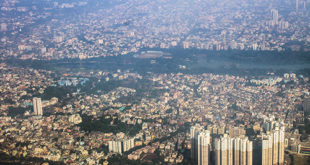 Bhutanese stuck in Kolkata due to lack of airfare money 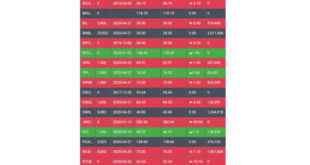 9 August 2019: His Majesty The King Granted an Audience to the Graduates of the Royal Institute of Management on the eve of their Convocation Ceremony.
Before the Royal Address, His Majesty spent time interacting with the graduates and hearing their concerns and insights about the trajectory of our progress and the future of our country.
Addressing the graduates, His Majesty said that it is our responsibility to protect and preserve everything that we value the most- our past achievements, core values, identity, and national security.
“As you hold a special place of influence within the nations’s ecosystem, it is imperative that you always promote and defend the peace and unity that we enjoy,” His Majesty said.
His Majesty said that it is the integrity and innate sensibility of the Bhutanese which has contributed immensely to our achievements as a nation, and we must retain these qualities even as we acquire new knowledge, skills, and methods.
“Climb higher on the shoulders of past achievements- your task is not to fill old shoes or follow a well-trodden path, but to forge a new road leading towards a brighter future,” His Majesty said.
His Majesty said that being a small landlocked country, with many resource limitations as well as challenges, we have always feared failure the most. As a result, with the best of intentions, a fail-safe system began to take shape.
“Today we realise that though the intentions were good, this has led to systemic constraints and posed unintended structural limitations,” His Majesty said.
His Majesty said that such a system served its purpose, but over time, it has outlived its usefulness. It may have stifled innovation, creativity and enterprise, and adversely affected leadership, accountability, and prudent resource management. These are problems we cannot ignore, and have to be addressed.
His Majesty said that jobless growth of economy is a ubiquitous problem, and not unique to Bhutan–  our focus must, therefore, be on generating employment.
His Majesty said that in 2012, our foreign reserves, accumulated over generations and decades, was 674.5 million USD. In the same year, the social media app Instagram was acquired by Facebook for around 1billion USD.
“I was amazed to learn that Instagram had only 13 employees at the time of acquisition,” His Majesty said.
We have to figure out ways to use technology to solve problems– to improve governance, democracy,  education, agriculture, to create jobs, enhance wellbeing, in healthcare, to make our cities safer and cleaner, and in various other ways that will benefit our people, His Majesty said.
His Majesty said that as a small country, we have to look beyond the domestic market for growth, and we have to look to technology to overcome traditional economic limitations of size and landlocked location.
His Majesty said that we have very talented Bhutanese, who, given the right training and preparation, can take advantage of technology and in this way, enable higher productivity and greater wellbeing.
His Majesty commended the progress that we have already made in some areas, but said that the pace of the change has to be stepped up. Now is the time to think about how to make use of emerging technological advancements such as Digital Identification, Artificial Intelligence, Blockchain, Internet of Things, Big Data, Quantum Computing, Machine Learning, Virtual Reality and Augmented Reality, etc, which present unlimited opportunities for Bhutanese.
“Being a small nation makes us a smart nation, this is not out of choice but out of necessity,” His Majesty said. “Technology is an indispensable tool that will be necessary to realise this aspiration.”
Share