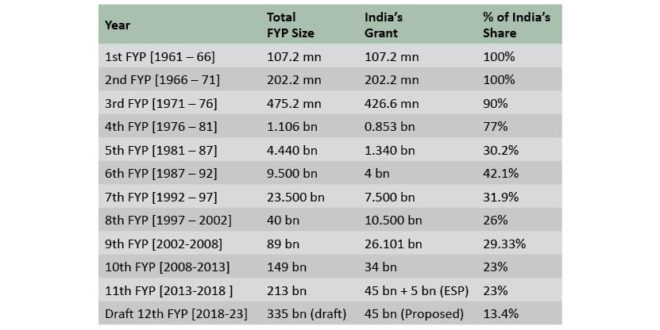 Even though the 12th plan revenue projections have been badly hit by tens of billions through the delay of the Punatsangchu I and II projects and the Goods and Services Tax (GST), the Royal Government of Bhutan (RGoB) may not seek any increase in the grant amount from India for the 12th plan.

The Indian government gave Nu 45 bn as grant in the 11th plan with an additional Nu 5 bn as an Economic Stimulus Package (ESP).

As per the tentative and draft 12th plan the proposal is to seek the same 45 bn from India as grant for the 12th plan like in the 11th plan.

This is subject to change during the finalization of the 12th plan, but the principle is not to seek a grant increase much above the 11th plan.

If finalized, this would be the first time in Bhutan’s history that Bhutan is not asking for an increase in the grant amount for a five-year plan period.

Since the start of planned development in 1961 Indian grant assistance has been going up every five years even though its total share of the plan has been coming down. (see main box)

This would mean that Bhutan in total may in fact be seeking a reduction in the grant amount from India for a bigger 12th FYP.

Even though Bhutan has the option of asking India for more grant money in line with the past trends, the current government wants to give priority to strengthening Bhutan’s self sufficiency and in doing so its sovereignty.

The government’s proposal to seek less grant from India comes despite a drastic decline in revenue projection for the 12th plan.

The draft 12th plan had initially forecast an internal revenue of Nu 251 bn.

The bulk of the Nu 251 bn revenue was supposed to come when P II was scheduled to be completed by December 2018 and P I was supposed to be done by June 2019. However, a July 2013 right bank slip and rectification measures could push P I well into the first few months of 2022 when the 12th plan is ending and the P II would be pushed to around the end of 2019 due to a cavern collapse and geological weakness.

To add to these reduced revenue projections, the GST will also shave of around Nu 14 bn in revenue collection during the 12th plan.

The final internal revenue projection now is much below this projected Nu 251 bn.

Bhutan clearly had the option for making up for this shortfall by asking a big donor like India for much more grant money. However, it seems, for now, that Bhutan is not opting to ask India to make up the deficit.

Donor money, especially from India, has always been a quid pro quo, making Bhutan excessively dependent on India which comes with its own strings.

However, the final decision will lie in the hands of the next elected government which will decide the final 12 FYP plan and also the final grant amounts to be asked. The current government will finalize the draft 12th FYP.

Of the 45 bn committed by India for the 11th plan around 89 percent has already been received with the remaining Nu 4.893 bn expected to be received in the next two months before the term of the current government ends.

India is also expected to release around Nu 4 bn in excise duty owed to Bhutan in the next two months.

The RMA as of two weeks ago had around INR 13 bn of INR reserves and so the release of the grant and excise duty in the coming months will further strengthen Bhutan’s INR position.

During the former government’s time even after its time was over in office India had not sent around Nu 3.2 bn in spillover works for the 10th plan which had to be obtained by the current government. 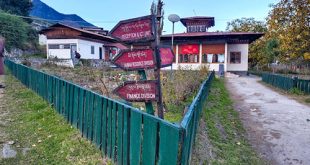