Tshering Chonzom, head of the Radhi weavers group, saw the Dorjibi weaving center in Bumthang on BBS TV and wondered why she was still waiting. Today she is in Thimphu (again), seeking funds for her own geog’s weaving center, whose growth, so far, has been rickety at best. “I am sure our MP will come to our aid,” said Tshering Chonzom, adding that she had had the honour of weaving for the Tshogpon, the latest being a Lungsem last summer.

Two years from conception in 2010, and the Radhi weaver’s group is still waiting for equipment so that serious work can begin. In October 2011, the office of the regional trade and industry in Mongar, acknowledging the lucrative burey market, agreed to grant a

set of 15 handlooms to the group. The promised looms arrived in early February 2012 but crucial components like the phunpalang (thread passer) and neyshing (thread lifter) were missing.

“We have informed the office of the missing components and they have promised to send the phunpalang which is available in Mongar but the neyshing will take time,” said Radhi Gup Jigme Namgyel adding that it was also one of the reasons Tshering Chonzom had gone to their MP, National Speaker Jigme Tshultim seeking aid.

The geog had, using CDG funds, sent Tshering Chonzom for training in 2010 and a year later, two other women. Four machelooms were also purchased and work started under the supervision of the trained women. However, the group has 38 members and this caused dissent among the members when it came to the actual weaving. Of the four, only one remains functional now.

Tshering Chonzom is also looking for funds to build a weaving center in Radhi. The looms are currently placed in the geog meeting center which can accommodate about eight and the rest will be placed in rented space.

If funds can be obtained the group plans to build a showroom in Radhi, targeted for tourists and if all goes wells, chains could be set up in prospective markets like Thimphu, Punakha, Haa and Paro.  A burey gho would cost up to Nu 15,000, not a negligible sum by any standards..

However, the venture could possibly face death in the very early stages as weavers face major transportation difficulties in coming to the main weaving center. The group consists of members from five villages of Tokshimang, Bongman, Tongling, Jonla and Langtoe, the furthest being an hour’s walk from the weaving center.

“Some have to walk over an hour to get here,” said Tshering Chonzom, expressing doubt as to the weavers’ turnout. Some members have also expressed doubts as to the wisdom in working in a group rather than as individuals but the Radhi Gup dismissed them as talk stemming from frustration at the delays.

For now though, all that can be done is guess and hope, for the agricultural season, which starts from as early as March, is near

and even if everything can be put in place, work can be started only at the end of the Radhi rice year. 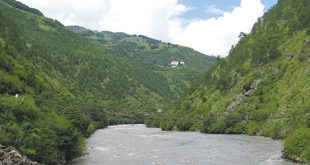 The Department of Agriculture Marketing and Cooperative (DAMC) admitted, there were some disruptions in the …