More than 5,000 Bhutanese want to come back from Middle East, India and Australia: FM

The Foreign Minister Lyonpo (Dr) Tandi Dorji said that more than 5,000 Bhutanese want to come back to Bhutan and the government is working on the logistics around it.

The largest group is from the Middle-East where of the around 6,000 Bhutanese there around 4,000 want to come back, said Lyonpo, according to the information with the Kuwait Embassy.

Lyonpo said that he has heard that while Bhutanese are being treated well there are also cases of Bhutanese being laid off and having a difficult time.

Lyonpo said that the government is working out a flight plan to get Bhutanese from there, but Bhutan would have to seek permission and the people flying in would have to pay for their own tickets.

Meanwhile, Bhutanese families in Kuwait, via Facebook, shared that the situation in Kuwait is getting worse day-by-day, and the number of cases are also increasing which is causing panic amongst the Bhutanese working there.

They also shared that after the COVID-19 outbreak, many Bhutanese left the country without informing their employers, especially those that had their passports with them. But for Bhutanese who have no passports at hand, as employers withhold the passports; it is difficult for them to leave the country.

They said almost 90 percent of the Bhutanese in Kuwait have decided to fly back home if given the government support.

A name list of Bhutanese wishing to return home has been submitted to the Royal Bhutan Embassy in Kuwait.

The officials at the embassy are doing great work, said one of the Bhutanese working there.

“We don’t have any Bhutanese with COVID-19 cases. We are safe for now but we are worried that we may get infected due to the huge number of workers travelling in buses and from working places or area. Most of Bhutanese are still working without any leave because if they take leave, the company is not going to pay their daily wages. There are some who got paid leave,” said one of the Bhutanese working in Kuwait.

The other big group is from India where around a 1,000 mainly students but also some workers and monks want to come back from seven major Indian cities.

The government is also making a flight plan and it has sought permission from the Indian government given that India does not allow foreign flights and it is in a 21-day lockdown.

India had asked for specific list of the people and their locations which the Foreign Ministry handed over on Wednesday to India’s Ministry of External Affairs.

Lyonpo said that he also met the President of an association of Bhutanese in Australia and heard about around 150 Bhutanese wanting to come back from there (see story on pg 12).

Lyonpo said the government has said that it will make a flight plan to send a relief flight there with the condition that air movement must be allowed and that people should have to pay for their own tickets.

The Foreign Minister, talking about the large numbers in the middle east, said that once the permissions come in the current restrictions could be lifted and then Bhutanese would also be able to come back on their own using the normal air routes.

However, with around 5000 plus Bhutanese wanting to come back, the challenge, apart from transport, is the quarantine facilities.

As of 3rd April, there are 3,218 Bhutanese in 121 government quarantine facilities in the form of hotels.

Lyonpo said that Paro and Thimphu have additional space for around 1,000 more people in addition to the current numbers.

He said that they are exploring and looking at space in places like Bumthang and Trongsa where they can be sent via ATR planes. Lyonpo said that in case of large numbers they would have to start exploring schools and hostels.

Lyonpo, however, expects the pressure to start relieving by the first week of April as the first batches of those completing the 21-day quarantine period can be released by then.

He said that the first batch would have come in by 18th March. This means that by 7th or 8th April the people in quarantine can be released in batches of around 118 which is the flight capacity that brought them in.

Earlier this week the Prime Minister Dr Lotay Tshering said that there are around 15,000 to 16,000 Bhutanese abroad and that His Majesty is very concerned about their welfare.

Lyonchhen said that His Majesty has commanded that not only the sick patients should be helped but their family members must also be helped.

An example according to Bhutanese living in New York is that His Majesty has commanded that for Bhutanese who need quarantine facilities after being discharged, a couple of flats could be taken on rent to help them.

The PM said that the government, on Royal Command, has hired one.

Share
Previous Govt ensuring stocks for up to 6 months: MoEA Minister
Next Anxious wait for Bhutan for lifesaving medical equipment and supplies with raging global demand 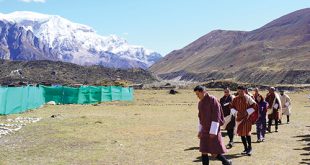 His Majesty grants Land Kidu to people of Lunana